The inspiration came from gangs, both the Yakuza and its shogun-style hair as well as Latin gangs. 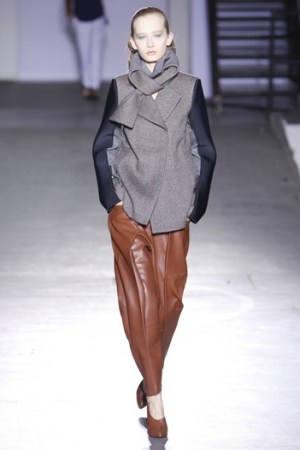 Preshow, Phillip Lim called attention to his models’ hairdos — mostly down with a tight knot on top. The inspiration came from gangs, he said, both the Yakuza and its shogun-style hair as well as Latin gangs. Maybe that’s where the models’ tough, no-nonsense demeanor came from, not to mention the show notes’ enigmatic opening quote: “A loitering presence.” This was Lim working a harder message — one rooted in urbane strength. The gang influence appeared most literal in the tribal and Art Nouveau-like illustrations (riffing on Yakuza tattoos) on cropped ponchos and tent dresses, as well as the collection’s signature pant with demonstrative folds running down the front — Lim’s take, he said, on how Latin gang members buy pants a few sizes too big and then fold them over.

As influences go, they were plenty intriguing. But by show’s end, the overarching statement was about what Lim does best: chic sportswear, this time with an emphasis on the sporty, graphic and structured. He also put a major spotlight on point-counterpoint. A twill jacket was spliced with Neoprene sleeves, and an easy silk jumpsuit displayed thick napa leather ones. A top, meanwhile, came slicked with patent panels down the front. “I want to make these futuristic fabrics more approachable,” Lim said. So were they? With the exception of a few awkward evening looks and a sad patent tunic, absolutely.