Christopher Bailey's outerwear-packed collection was all about cross-breeding country with city dressing. 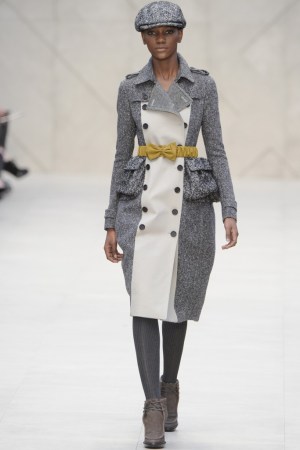 Christopher Bailey heard the call of the wilds: the Scottish hillsides abloom with heather, the green hills and dales of Yorkshire — and the gritty streets of London. His outerwear-packed Burberry Prorsum collection was all about cross-breeding country with city dressing — taking cues from hunting, shooting and horse riding, and working them into an urban wardrobe.

“I love the idea of merging worlds — the digital and physical worlds, the country and city,” said Bailey, who was mobbed after the show by press, celebrities and the Korean music group Girls’ Generation. “And I like taking familiar elements — the field jacket, the quilted jacket, the trench — and respecting them but making them modern.” The result was a lineup of glamorous hybrids in classic men’s wear fabrics: There was a trenchcoat with a plaid wool peplum, a cropped herringbone bomber jacket with a shearling lining and a quilted velvet burgundy coat for evening.

Bailey borrowed the utilitarian patch pockets of the classic shooting jacket, puffed them up and placed them on Glen plaid coats with nipped waists. One tweed trench had puffy pockets in a contrasting herringbone fabric, while a princess coat had large, flat patch pockets similar to those on a Barbour jacket. To accentuate that whiff of the countryside, there were jaunty cartoon owls and dogs on knits and blouses, and ornamental animal heads on belt buckles and umbrella handles.

And while outerwear may have played a starring role — after all, it accounted for more than half of all the brand’s apparel sold at retail last year — the supporting cast was out in force, too. Bailey worked a Thirties chrysanthemum print into shift dresses, one of which had bows at the shoulders instead of epaulets, and gave his pencil skirt a spin with a fat, curving ruffle at the front. The new accessory is the elasticized bow belt, shown in a variety of colors, which cinched many a coat, jacket and dress.