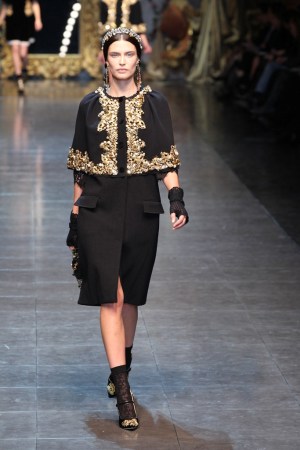 “Romantic Baroque.” That was the ruse for Domenico Dolce and Stefano Gabbana’s collection, a motif rich with material from the island they adore, Sicily. The designers established the tone with an elaborate installation — their runway under the glow of 16 massive two-tier chandeliers, wrapped in flowers and festooned. The girls emerged from a huge gilded picture frame, also done up with flowers.

Moody and fanciful, the set sent the message that here would be no minimalist musings. But then, who would expect that from Dolce and Gabbana? Which has become a problem. Not that the designers don’t do minimal, but that they have ceased to unsettle our expectations. “We’re always asked to be ourselves,” Dolce said before the show. “The challenge is to remain true to Dolce & Gabbana while renewing ourselves, so we work on materials and research.”

This season radiated the benefits of that very impressive work. Heavy gold embroideries on black, inspired by ornately carved frames, were the principal motif. Exquisitely rendered, they appeared on everything from outerwear (coats, jackets and capes, one of which appeared to weigh more than the model who wore it) to the necklines and waists of pretty dresses. On the lighter side, beautiful white laces and tulles were worked into dresses and blouses, and if they spun a familiar romantic yarn, it was a lovely one. Otherwise, petit-point florals and dark cherub prints infused color.

Overall, the lineup played as costumey, not in itself a problem; the long fashion season needs shots of grandeur and theater. And the show included beautiful clothes for the discerning shopper. The shortfall lay with the familiarity. Absolutely, Dolce and Gabbana must remain themselves; to do otherwise is fashion suicide. But the fashion self shouldn’t be content with redux. There are too many other selves out there, some of whom dare to push their own envelopes.