Karl Lagerfeld sent out a lineup that could not have been more complicated or, in this age of Minimalist worship, bolder. 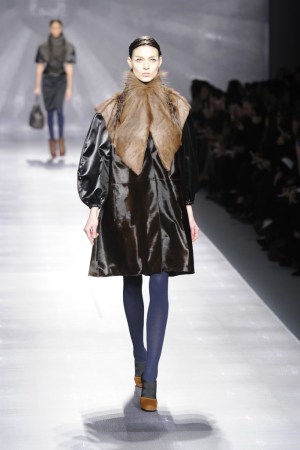 That Karl Lagerfeld has a lot going on has become a fashion truism — one never truer than on his fall Fendi runway. Program notes suggested “the warm glow before snow” and “infinite, innovative interplay of textures, colours and fabrics.” If the former confused — no snow sirens here — the latter proved spot-on, as Lagerfeld sent out a lineup that could not have been more complicated or, in this age of Minimalist worship, bolder. The sheer effort intrigued, and much of it looked great, though the move from runway to reality will likely involve some simplification.

The show operated on multiple levels: as a study on piling it on while staying body conscious; a treatise on the wonders of Fendi fur, and a ruse to show the house’s new — and this season, quite demonstrative — handbags. Anyone for a lavishly embroidered, metal-framed iPad case?

Though polished and impeccably finished, the collection had the aura of the modern warrior-princess, feminine but oh-so-strong. The models’ hair, done in multiple tiny braids, some wrapped around the head, looked equal parts Heidi and Valkyrie. Throughout, there was the recurring motif of stingray, a theme flagged on the runway itself, a vast stretch of shagreen-printed PVC. It was repeated on everything from handbags and shoes (real) to blouses and hosiery (prints).

Lagerfeld opened with coats and jackets under aggressive fur bibs. He then went to pieces, literally, concocting looks from countless parts: abundant, contrasting sleeves; pleated insets; “demi-kilts” cutaway over under-layers; offbeat bustles and often, enormous corset belts. Everything came in combinations of colors — greens, purples, navies against neutrals — and textures, from languid silk to duchesse to leather and croc. The furs were as worked as the clothes. A sable coat sprouted gravity-defying gazelle tufts at the collar; out-there, collage “bird furs” looked like the rambunctious offerings of a rich, renegade art student — albeit ultrarefined takes on her assignment. You go, girl.