“Romanticism — literally speaking, of the 19th century.” That was Frida Giannini’s starting point for her fall collection. 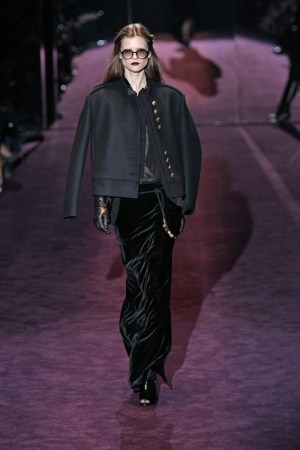 “Romanticism — literally speaking, of the 19th century.” That was Frida Giannini’s starting point for her fall Gucci collection. It worked like a charm of the seductive, rather than sweet, variety. She chose a palette moody with color (dark maroons, greens and navys) and fabrics with flourish; high-drama brocades and jacquards formed the base, worked in combination with velvet, fur, silk and leather.

There was a poetic practicality to Giannini’s tailoring. She focused a great deal of attention on day clothes — real, functioning day clothes — worn in texturally intense layerings that evoked the literary dandy without looking silly. In their combinations and controlled swagger, some were informed by the language of Saint Laurent. Opening the show: a boxy structured jacket with a vague military effect over a long velvet skirt. This was just one of numerous strong outerwear pieces that ranged from a languid velvet trench to an alpaca-lined knitted mink and grandly proportioned cape. Grounding the opulence were equestrian references in jodhpurlike pants and flat riding boots. On the softer side, lean dresses were inset in velvet front panels and waistbands; some flaunted explosions of huge florals.

For evening, Giannini showed iridescent feathers, languid velvets and six silk chiffon gowns with mesmerizing 3-D embroideries. Actually, they were versions of the same look, as if the designer was indicating to someone still undecided about her Oscars dress how the broodingly glamorous number could be tweaked just for her.