The clothes were all gothic drama and underground kink, as Donatella Versace turned on the dark for fall. 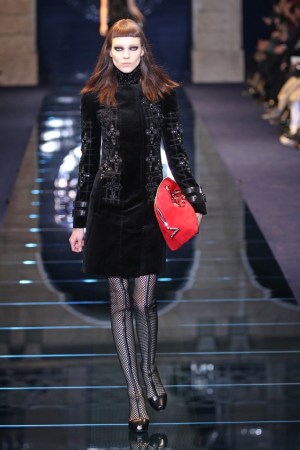 With their bangs bluntly razored an inch beneath the hairline, eyebrows bleached and cheekbones lit like knives, the models in the Versace show looked like the kind of girls you find at ease in a nameless afterhours club — or in an Oscar-nominated performance by Rooney Mara. And that was just from the neck up. Below, the clothes were all gothic drama and underground kink, as Donatella Versace turned on the dark for fall. Not even her high glamour gloss of crystals and articulated curves (both here in spades) could file down the edge.

To see the designer depart from the levity and exacting polish of her recent collections, not to mention the Versace homage that’s been happening in fashion at large, was a good feeling. The show opened with two black velvet dresses — one covered up, one bare — both embroidered with leather Byzantine crosses, a recurring motif. Versace played it big — blaring and bejeweled smack in the middle of a corset — and small, crafting a breastplate out of laser cut black on a fitted and flared moto jacket that was sleekly executed. But things got silly where the crosses were used as colorful prints, which segued to letters that spelled V-E-R-S-A-C-E all over dresses. Such gothic glitz relates to the house vernacular for sure, but shown so blatantly it bore the look of a secondary collection, not because it looked cheap, but too flagrant. Giant letter-block prints don’t play well on designer turf.

More daring, more sex-charged and more modern was the use of chainmail, which signaled a whiff of savage crusader that also turned up on dresses traced with coarse, laced seams around the bodice. It was relatively modest as a T-shape along the shoulders of loose shift dresses, and chicly illicit on side panels of clingy dresses, including a finale of silver columns veiled in open, metal mesh.