Wang continued the trompe l’oeil thread he started for pre-fall by taking, he said before the show, “a Surrealist approach to fabric manipulation." 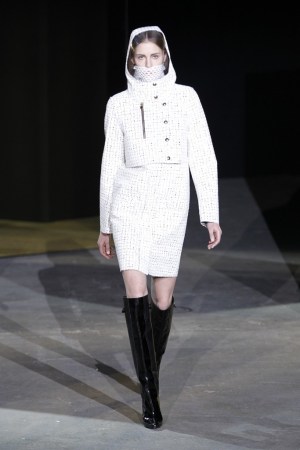 Alexander Wang’s fall collection was terrific — we think. The clothes were tough to see clearly since the set had less light than an east-facing apartment at sundown. Would a little more wattage really have killed the mood? No, but then, a dose of sartorial confusion was just the point. Wang continued the trompe l’oeil thread he started for pre-fall by taking, he said before the show, “a surrealist approach to fabric manipulation. The idea is a distorted perception of things you might think are raincoats but are actually laminated tweeds.”

The notion provided a grainy backdrop — installed with cubic mirrors — for Wang’s high-octane sportswear machine, now capable of developing from scratch 90 percent of the materials used in his collections, a factoid the designer proudly disclosed backstage. A multitude of stiff, shiny treatments shone well on the limited palette of white, black and a bit of oxblood, while amping up the stylistic tension. Lacquered merino wool tweeds, waxed suedes and shrink wrapped-jacquard knits were worked into graphic silhouettes, his most defined and daring yet, particularly when it came to outerwear. The first look was a boxy, white lacquered tweed raincoat with a round helmet of a hood. Under it, a fishnet turtleneck was pulled up over the model’s mouth — there was a lot of that. In fact, the mood of chic aggression recalled, but didn’t replicate, early Nineties Helmut Lang. Yet while edge is in the atoms at Wang, he slipped in a moment or two that nudged toward minimalist bourgeois, for example, a shiny, crewneck sweater worn with a long, straight leather skirt that wrapped in the front, creating a generous slit.

At the bottom of the show notes, which ended with look 31, the instructive “Please stay seated…” was printed. Most people were banking on some kind of live performance, but after the models took their final walk, the lights changed and out came a more elite and (excuse the term) elder pack of models, including Shalom Harlow, Karolina Kurkova and Gisele Bündchen as the finale. The looks they wore were in the same vein as the previous 31 but with less shine, more refinement and more tailoring, perhaps to signal Wang’s correct conviction that, hip as they are, his clothes do indeed have range. After a lap, each girl took her place facing one of the mirrors at close range. Supermodels looking in the mirror….There’s probably a surreal message there.