The idea of real strength was the central theme for Francisco Costa and his bold fall collection. 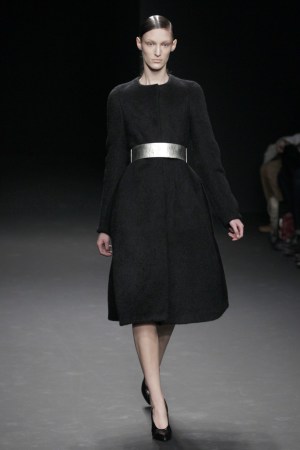 Power. It’s the ultimate aphrodisiac. At Calvin Klein, it’s also a substantial business reality: an American fashion powerhouse and engine behind parent Phillips Van Heusen’s success. That’s the only plausible reason why the Occupy Wall Street movement would plan a march outside Thursday’s Calvin Klein Collection show. In the end, however, the turnout of just a handful of protesters was weak.

By contrast, the idea of real strength was the central theme for Francisco Costa and his bold fall collection. “It’s very Bauhaus, but about the Bauhaus woman of the 1920s,” he said before the show. “She had strength, she was very powerful.” But Costa’s architectural ode to the strong woman didn’t translate into female warriors. The designer took the theme on with a more subtle hand, sending out appealing clothes in ultrafeminine silhouettes — almost paradoxically so — starting with the first exit: a black wool mohair A-line coat cinched at the waist with a wide silver belt. Another example came with the cropped burnt-orange cashmere sweater worn over a matching shift dress.

His use of thick wools resulted in several great coats, but a few of the dresses in similar fabrics looked heavy. Costa added a touch of tough via leather, which was shown, for instance, on a shift dress with exposed white panelling in the side pleats, and on a sleeveless dress with a black top and a structured white, fluid skirt.

The overall effect — the all-black set, the slow thump of the soundtrack and the models’ graphic hair, slicked sideways or cropped with cut bangs like Rooney Mara, who sat in the front row — was indeed powerful, but the reality of the clothes had a softer side: ladylike and charming, even with a Fifties couture touch.