The designer created a tribal vibe via thick, glazed leather biker jackets and faux furs worn over draped jerseys that clung to the body. 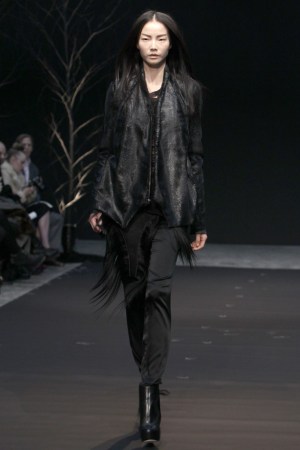 Of the relatively emerging New York school of designers, Kimberly Ovitz has been one of the few to hone in on a dark point of view, which was at its sharpest for fall. It’s Gothic and brooding without ignoring a woman’s sexuality — a plus when you’re pitching to the contemporary customer. A visit to Ovitz’s studio a week before her show found an inspiration board pegged with images of Samurai, Lara Croft and armored getups collected from an old Hollywood costume house. Ovitz’s Japanophile friend had introduced her to Akira Kurosawa’s 1980 film “Kagemusha,” which put her in a particularly savage mood. Working almost exclusively in black with a few murky browns and a flash of white on a printed chiffon dress, Ovitz created a tribal vibe via thick, glazed leather biker jackets and faux furs worn over draped jerseys that clung to the body. There was texture in crushed velvets and dresses done with geometric embroideries. She used long black hair — reportedly human hair typically for weaves — as accents on cross-body straps. If the undiluted look was extreme, pulled apart it was a collection of easy dresses and great outerwear fit for a girl for whom tough is a look, not a lifestyle.