Jack McCollough and Lazaro Hernandez made a powerful sportswear statement with the distinct beat of the audacious urban warrior. 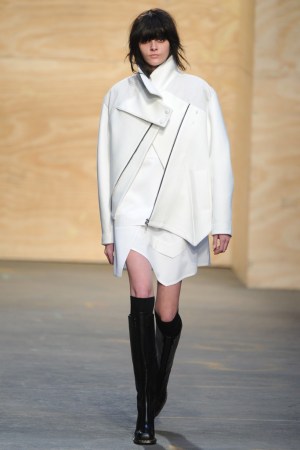 It’s no secret that Jack McCollough and Lazaro Hernandez view each runway collection as an opportunity to shred their previous show, do something totally different and knock it out of the park — which they did again for fall, providing one of the New York season’s few moments of significant fashion news. So spring’s retro kitsch of bustier tops and bad car interiors was out; a minimalist streak done in maxed-out silhouettes was in, at least at the outset.

The show opened with crisp white cottons in poplin jacquard and pique because “we were just bored with wool,” said McCollough during a preview. Big boxy jackets, shirtdresses and skirts were fashioned from flat, precise layers that folded across the body with uneven hems and workwear details, such as patch pockets and diagonal zippers; extra-wide-leg pants sat low on the hips. It made for a powerful sportswear statement (it went on to include biker leathers) — with the distinct beat of the audacious urban warrior. It also spoke to the power of the Celine phenomenon, but not in a literal way. As fantastic as the separates were for their construction and impact, they were challenging as well, those voluminous proportions not for the faint of heart. What could not be overstated were the extraordinary fabrics — all developed in-house and custom-made.

Once the extreme oversize moment passed, the designers offered more manageable shapes, including suit jackets and stiff wrap skirts made from intricately woven leather in red, black and gold that approximated tweed, and drapy lacquered lace tops in robin’s egg blue and black that tied at the neck and fell open in the back. Seeing clothes so polished and expensive-looking still convey a street attitude is what made it so fabulous.

The show ended on a distinct Oriental note. “We weren’t trying to do a Chinese theme or Chinese culture, or anything like that,” said McCollough. Maybe not, but the Eastern link was obvious, and it wasn’t out of nowhere. The designers vacationed in Bhutan in October when the country was focused on its king’s wedding. They were taken with the colors and patterns of the traditional national garb, which inspired the elaborate brocades they used for gorgeous short dresses with stiffened, arched hems, and a sweatshirt done in quilted silk embroidered with two exotic birds.