In a season of major fabric awareness, the designer's combinations felt natural and uncontrived. 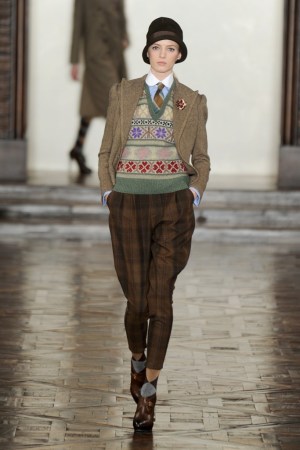 In retrospect, it seems odd that it took until the last day of the New York collections for “Downton Abbey” to hit the runway. But then, who better to work that motif than Ralph Lauren, whose multifaceted aesthetic has one plain deeply entrenched in the charms of English country life?

Lauren set the refined retro mood with an aged parquet floor, his models emerging from an immense, exquisitely carved dark wood door frame to the strains of the television series’ theme. He opened with casually elegant men’s wear looks all in mixes of the earthen tweeds, plaids and checks that he loves. In a season of major fabric awareness, his combinations felt natural and uncontrived. While the styling played to the Downton nattiness, the pieces were utterly versatile; witness the fact that a leather motorcycle jacket felt as right in the mix as a natty spencer. As for the coats — fabulous, in a range from herringbones and plaids to ocelot-printed shearling. Wisely, Lauren didn’t stay in the manor too long, and if one wished he’d also pilfered the ladies’ closets more overtly by day, there were still good things to come.

The rest of the show was all about the timeless elegance of black and gold. Several looks paired black skirts or pants with gold-embellished sweaters; a long cardigan over a shirt, tie and wide pants had a particular nonchalance. But soigné has a sensual side, which Lauren exposed in curve-hugging dresses and gowns decorated with elaborate beaded collars for that glorious combination of elegant and sexy. His ladies may reside in an abbey, but they’re not nuns.