The prevailing message of everyday luxe infused a street-savvy attitude with adult sophistication. 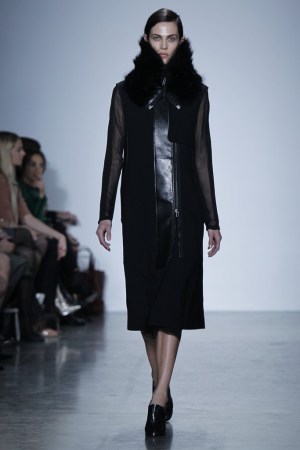 Reed Krakoff started work on his fall collection intent on achieving, he said in a preview, “a sense of architecture and geometry while creating fluidity.” That high-minded thought resulted in a smart, grounded collection comprised of some very chic clothes.

The prevailing message of everyday luxe infused a street-savvy attitude with adult sophistication. In the play of sculptural and soft, the former dominated; the looks carried a certain weight, perhaps due to the strength of the outerwear, which came in sturdy fabrics such as bonded wool, canvas and shearling. The juxtaposition came both in the way outfits were put together — coats over dresses and separates with fluid elements — and in individual pieces that featured sheer and solid panels. Multiple fabrics in a single item have emerged as a major direction this season. Krakoff’s approach combined textures and densities: a vest in black wool canvas and leather, a cashmere sweater with blocks of silk and leather. Either way, he favored tonal combinations. Most looks mixed multiple textures of black or white, but he injected the pop of crimson into the lineup.
Occasionally one caught the sense of Celine in the air. Wisely, Krakoff kept his admiration in firm enough check to make the graphic minimalist motif his own. He has taken this collection a long way in a short time.