Olivier Rousteing amped up the flash with a bold lineup that explored surface ornamentation, taking it to the nth degree. 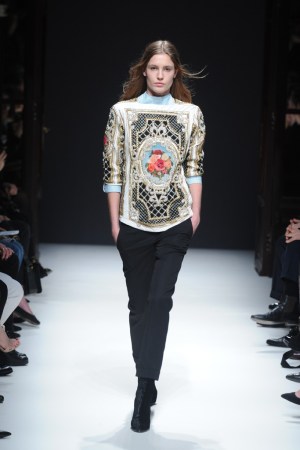 More is more, and then some. It’s a school of thought that Balmain’s Olivier Rousteing clearly subscribed to for fall, with dazzling results, literally. He amped up the flash with a bold lineup that explored surface ornamentation, taking it to the nth degree. He piled on the embroidery and embellishment — pearls, crystals, studs, upholsterylike quilting and needlepoint florals, often in the same piece — for jackets, tops and formfitting dresses. The overall effect had a touch of Baroque and resembled jeweled Fabergé eggs, which was intentional: The designer was inspired by one such czarist gem that Richard Burton gave Elizabeth Taylor. “I went to New York and saw the Christie’s exhibit, and it was so beautiful,” Rousteing said before the show. “I loved the opulence.” The approach could have made for a heady mix, but the excessive ornamentation worked mostly because it was exquisitely executed and looked sexy and ultrarich — even La Liz would have thought of them as jewels for the body.

Rousteing suggested a boxier silhouette for jackets and tops, including a ponyskin jacket with a formfitting skirt and a smoking jacket with ultraslim pants, for day — an area that he still seems to feel a little less comfortable in, even though the crisp white sweater teamed with less lavishly embellished velvet trousers on Karlie Kloss was a step in the right direction.