In a season fairly obsessed with volume, Phoebe Philo amped up the silhouette of her famous sporty luxe. 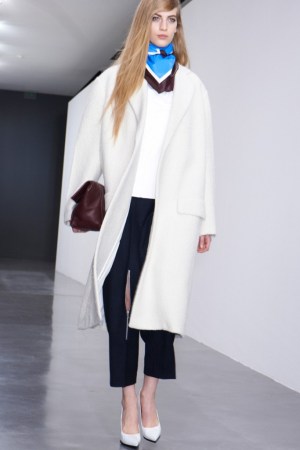 Phoebe Philo isn’t only minimalist in her fashion aesthetic. Very pregnant with her third child, Philo eschewed the typical large-scale runway show in favor of a tight lineup presented in two small showroom shows. She came out briefly prior to the start of the second, acknowledged a few guests and left before well-wishers could find her backstage.

In a season fairly obsessed with volume, Philo amped up the silhouette of her famous sporty luxe, her approach on a vague wavelength with Balenciaga’s Nicolas Ghesquière but without the overt experimentation. Rather, Philo grounded her proposals in complete reality — tony clothes for everyday life. This meant sloped-shouldered coats with wide leather half-belts in back; trousers, some with electric tuxedo stripes, others with vertical knee zippers and, one of her sleekest looks, a leather shell over lean white pants.

The best of it bore the chic simplicity befitting fashion’s current minimalist queen with a rabid fan base among editors and consumers, though even some card-carrying members may steer clear of the roomier looks. It’s hard to imagine whom Philo had in mind with her colorblocks, a coat in big chunks of purple, orange, blue, white, pink and black, and a pair of blouson tops that looked like jockey silks done over in leather and fur. Most likely, they were a one-season snafu. But it could indicate that Philo is finding essential diversification of her minimalist message rough sledding.