While Bill Gaytten described his message as “soft modernity,” the words “soft and classical” make a more apt handle. 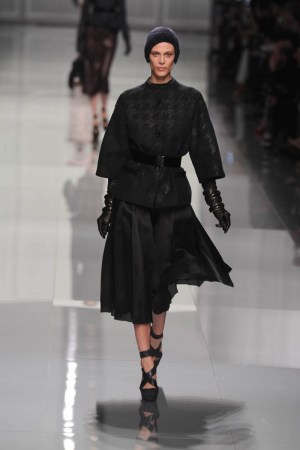 How much pressure must Christian Dior’s Bill Gaytten feel? He is either at peace with the unofficial status of fashion’s longest-tenured interim designer or facing an unenviable second year of auditions for the permanent gig. Either way, it can’t be easy. Despite the stress, once again, Gaytten performed gamely in creating his fall collection for the house.

While he described his message as “soft modernity,” the words “soft and classical” make a more apt handle. A subtle but telling difference, as Gaytten’s lineup linked clearly but not dangerously to the New Look, focusing on a cinched-waist, often belted, full-skirted silhouette. While he made a significant point of surface interest, with big stone embroideries and graphic fabric plays, his boldest stroke was his midcalf skirt length. Fabrics that flowed looked lovely — a gray knit dress was a dream — while stiffer ones veered dowdy. As for tailoring, Gaytten offered simple blazers, knot-front necklines, modified Bars and a beautiful tricolor coat in horizontal blocks of dusty gray, blue and rose. For evening, the prevailing line evolved into gowns with flowing skirts.

The show went on too long for so singular a motif, a whopping 56 looks, particularly surprising since Gaytten spent so many years in the Galliano-esque low-thirties range. Still, except for a few too-weighty numbers, the clothes were pretty. And word is that Dior has started to take off at retail. That would be Gaytten’s Dior. So the question remains, what does the house of Dior do? What do Bernard Arnault and Sidney Toledano ultimately want of their designer? If they want heart-stopping, breathless, directional fashion, Gaytten has not indicated an interest in, let alone an affinity for, that type of work. But if they want pretty clothes that can anchor the brand while attracting paying customers and the all-important red carpet celebrity, from his work here and in the January couture, Gaytten seems to have earned a shot.