Rei Kawakubo focused on two often-challenging dimensions: those of major volume and color. 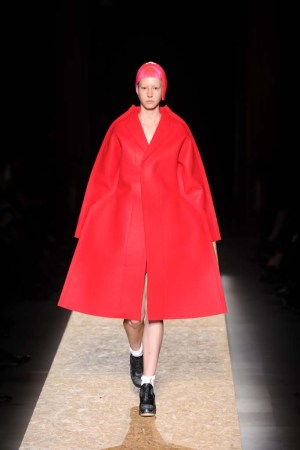 Among the guests settling in for Rei Kawakubo’s Comme des Garçons show on Saturday were a young woman and her daughter, who appeared to be about four. The mother dutifully informed the child of show etiquette, specifically, “No talking when the ladies come out on the runway.” Alas, the girl broke protocol with the very first look and a single word of wonder: “Wow!”

There, before her eyes on the plywood runway, stomped a model in a bright red coat, big and bold when viewed full frontal and flattened in profile. Out followed another such coat, in pink; then a blue suit with ample jodhpurlike thigh protrusions; a pink-and-blue circle frock, and on and on. Kawakubo’s runway was an explosion of outsized graphic precision and vibrant color. In their bright plastic helmet bobs atop clothes cut big and flat, her models looked like a parade of beguiling, clownish paper dolls, their silhouettes as unfettered as preschool cutouts. It was fabulous.

Structured fabrics in clear, dense hues set the tone, but Kawakubo also offered megapatterns, both dots and flowers. One of the best: the blanket checkerboard strewn with roses. When she tired of flat textures, she went for shine, not of the chichi embroidery genre but a type resembling those giant iridescent gift bags you buy at The Container Store. And just when you thought you grasped this big-and-flat thing, that it was all in good fun, she sent out some girls in rose prints with their faces shrouded in matching executioner’s hoods, in fabric, for a soupçon of her signature subversive tension (and one girl’s near stumble down the runway stairs).

Backstage after the show, Kawakubo offered her seasonal sound bite: “The future is two-dimensional.” Aha! An excited fan linked the provocative pith to our technological world and the eternities we all spend engaged one-on-one with flat computer screens. Reeling the thought back to just plain fashion, Kawakubo did indeed focus on two often-challenging dimensions: those of major volume and color. She had her radical way with both, and everyone left smiling. Wow, indeed.