It was an excellent collection, built on strength and confidence, which had something to do with equestrian motifs from the Seventies. 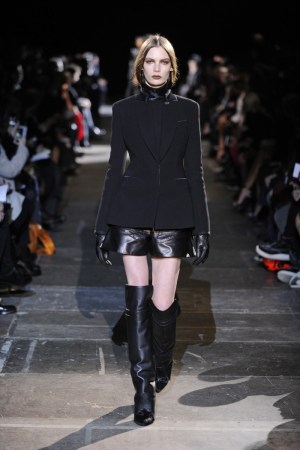 Pitch black and freezing cold, as a high school courtyard typically is at 8 p.m. on a Sunday night in March, the Lycée Carnot was nevertheless filled with the raw energy of anticipation for Riccardo Tisci’s fall Givenchy show. It opened with a light installation, red and white beams that chased around steel rings suspended from the ceiling to drum beats like a thoroughbred’s gallop. The horsepower pulsed down the runway through every look to the finish.

It was an excellent collection, built on strength and confidence, which — if the above wordplay and gallop soundtrack weren’t hint enough — had something to do with equestrian motifs from the Seventies, starting from the ground up. Each girl was shod in riding boots crafted from thick, refined leather from above the knee to the floor that, depending on your point of view, gave the impression of a hoof or a chic boot peaking out from boot-cut pants. It was the foundation of Tisci’s edgy proposition for iconic Seventies sex, of the Guy Bourdin variety, and androgynous glamour redefined on the designer’s terms.

Tisci’s signature acute tailoring came first with variations on riding jackets done in slick combinations of pony hair, fur and leather that were placed on precise panels. A relatively simple blazer paired with silk jodhpurs was done with a stand-up collar; finished to the nines in decadent piping, it was cut away in the back — a standard effect, whether as a straight panel or a sculpted tailcoat. More elaborate outerwear showpieces flaunted Tisci’s leather and fur workmanship, with graphic, diagonal patches of red, black and brown fur spliced on a jacket with short, angular sleeves.

The designer broke away from the sturdy hard-lined stuff with lingerielike dresses. They were soft and feminine with their lace-appliquéd, camisolelike tops and filmy pleated skirts, yet brash in their colorways, such as gold rococo embroidery on a bejeweled purple dress cinched with a bright red belt.

Broken apart, much of the collection had its origins in buttoned-up bourgeois attire — trim jackets and proper pleated skirts, scarves tied at the neck. But Tisci’s treatments — even the classics, like quilted leather — oozed chic aggression and sexuality.