The designer telegraphed a message of power-chic, fueled covertly by both dark and artful undercurrents. 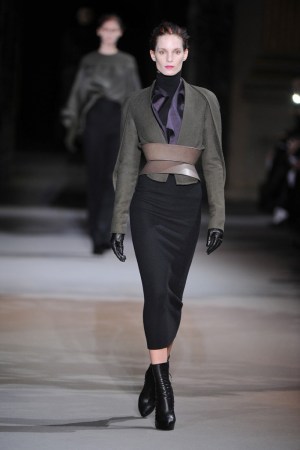 Extraordinary! With the collection he showed on Saturday morning, Haider Ackermann continued on his trajectory of awe. His show captivated with beauty as it intrigued, on one level with a moody aura, and on another, with extreme complications of cut (surely a pattern maker’s nightmare). The combination made for a fashion lover’s delight.

Ackermann’s work is both cerebral and sexy. Abandoning last spring’s more casual “rockabilly barons,” for fall he telegraphed a message of power-chic fueled covertly by both dark and artful undercurrents. A lean, even severe silhouette dominated, sometimes cinched with a sharply geometric corset belt. Ackermann delivered the look while incorporating serious volume — short, thick jackets bunched in back over slim skirts, a silk blouse with a wool yoke and billowing sleeves, and an almost obsessive fascination with the lower torso. This resulted in meticulously tiered and sculpted peplums, buttress-like hip adornments and leathers that pushed out from the waist to be cut away into dramatic front tails, as if commissioned for the archetypal cinematic glamour villainess. Ackermann softened it up beautifully, with abundant hooded coats and some languid dresses, including several gathered in front for a capelet effect. And throughout, he worked his color magic, playing groups of rich oranges, reds, blues and purples against earthy neutrals.

Most looks had a lot going on, and were studied for sure. But not a piece appeared overwrought or gratuitous. Still, for his final look, Ackermann repressed his yen for structure with an utterly unfettered long-sleeved purple dress, folded discreetly at the shoulders. Simply stunning.