Hakaan Yildirim’s all-leather ensembles in burgundy added a slightly subversive sexual current to the clothes, but his strongest work was also his simplest. 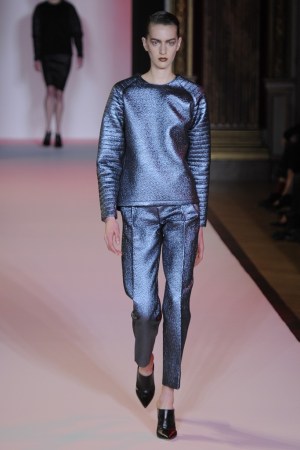 According to the collection statement, Hakaan Yildirim aimed to cater to a “strong iconic woman flirting with past and future.” The designer accomplished the mission for the most part with many architectural pieces in metallic textures, including a blue sculpted, formfitting dress with peplum details, and a boxy constructed coat with straight-cut pants in the same shiny material. They had a futuristic feel that was striking to look at, but restricted commercial appeal. Yildirim’s all-leather ensembles in burgundy added a slightly subversive sexual current to the clothes, but his strongest work was also his simplest, such as the great olive green double-breasted suit with a matching fur jacket or another, more casually fitting suit with a sportif leather jacket. They had the right touch of Eighties that actually looked timeless.