The show had the graphic minimalism of the Sixties with architectural shifts and outerwear shown over lean pants. 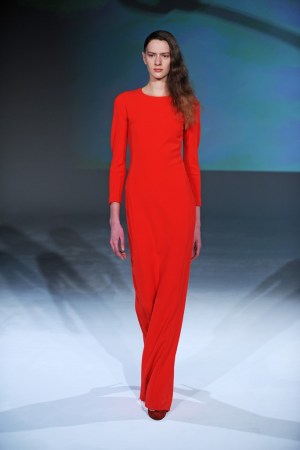 For whatever reason, in recent seasons, Hussein Chalayan has been compelled to tone down his highfalutin hijinks in favor of clean, beautifully crafted clothes that are grounded in reality. So much so that everyday environments were his concept for fall. “The collection reacts to different life situations,” said Chalayan during a preview. “If it’s a dark environment, the clothes are supposed to light it up. If it’s a domestic situation, it’s inspired by what you wrap around you at home.”

Broken into groups that were shown against a projection-screen backdrop that bore titles, like “No Dark No Light,” “Leaving,” “Here,” and “Just Is,” the show had the graphic minimalism of the Sixties with architectural shifts and outerwear shown over lean pants. The designer worked in bold color combinations — orange and red, black and neon green, and some metallic hologram effects — with plenty of somber notes too. Some of the best, and most surprising looks were long dresses that poured down the body in a slender line. A couple of them flaunted sculptural necklines made of Perspex and palladium. (Chalayan has recently struck a partnership with the International Palladium Board.) But for the most part, the elegance was in the gowns’ unfettered simplicity, for which he has big plans. “I would love to see our clothes on the red carpet,” he said. “Why not? Everyone does it and we can do it in a more interesting way.”