Alber Elbaz showed a beautiful, elegant collection — at once bold and riotously fanciful. 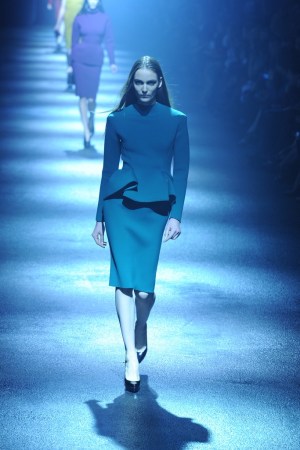 “The future’s not ours to see,” Alber Elbaz serenaded the enthralled guests who had just taken in the fall Lanvin fashion show that marked his 10th anniversary at the house.

The lyrics were particularly appropriate in this season of volatility elsewhere, and for Elbaz’s career, in crisis mode in 2001 after his brief tenure at Yves Saint Laurent came to an abrupt end. Few, probably least of all Elbaz himself, would have predicted that little more than a decade later, his star would be among fashion’s brightest, his success sprung from a delectable cocktail of self-deprecation, incredible talent and an oft-stated belief in exactly who comes first. “I do not design for journalists,” Elbaz loves to say. “I design for women.” And we believe him. He lives the mantra season after season — even if the gentleman doth protest too much on the matter of his work’s editorial resonance.

On Friday night, Elbaz threw a party — a fashion party and a party party. Setting up the latter, after the show, the set backdrop opened to reveal the designer onstage with a band, above them an immense glittering chandelier anchoring a network of lights strung up with little apparent regard for perfection. After Elbaz took his bow and Joey Arias finished the song, the party was on. A genuine sense of warmth and happiness for Elbaz permeated the event. He has proven himself a soulful member of the fashion community. It’s hard not to like and root for him. But nice-guy status only goes so far. Elbaz’s star ascended first and foremost because of the clothes, which from the outset struck a chord with women who connect on a deeply personal level to their artfully wearable, adult allure.

Typically, an elegant mood defines the designer’s runway. This time, he put that attitude on celebratory sabbatical in favor of a presentation almost manic in its pace and visual stimuli. Luckily, the clothes were beautiful, bold and at times, riotously fanciful. And always, they made sense. “The responsibility is no longer just about making a nice piece,” Elbaz said in a preview. “You have the responsibility, on one hand, to work on the vision, so you have to bring the newness, and it also has to have a zipper. How do you work with both?”

As it turns out, quite well, particularly when one of your signatures is a wide, curve-accentuating zipper running down the back of a dress. Elbaz said that he wanted this collection to be neither retrospective nor one-note. That said, he addressed favorite motifs while focusing mainly on a curvy silhouette, which he took in numerous directions. He opened with vibrant body dresses worked in a scuba-worthy foam that gave structure to peplums and collar frills, and ended with indulgent cocktail wonders in whimsical floral prints he did himself, the looks finished with bright gloves, stoles, plastic-and-mirror surrealist jewelry and shoes soled in crystals. In between were racy black leathers, high-glam golden brocades with matching boots, hourglass looks with monster jeweling and a charming left-field party frock on Karlie Kloss. It all made for a wonderful, frenetic romp — one that should continue to the selling floor. Joyeux anniversaire, Alber!