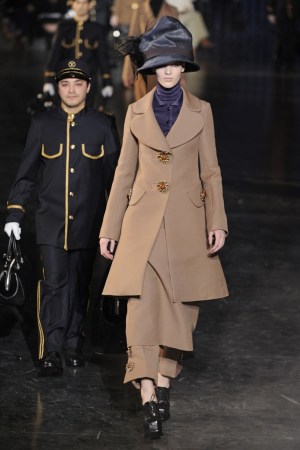 “How can we outdo ourselves?” That was the question Marc Jacobs posed to himself and his team at the outset of fall’s creative process, which commenced as soon as the grand, gilded merry-go-round of his spring show was being disassembled. A deliciously wicked tale of two Belle Epoque archrival divas came to mind. Jacobs had read the story in a Louise J. Esterhazy column from the W magazine of yore, and retold it during a preview with the disclaimer that memory might not serve exactly. The gist: When one lady — was it Sarah Bernhardt? — got wind that the other planned to arrive at an important ball wearing her jewelry collection en totale, she promptly trumped her nemesis by showing up in a plain black dress trailed by her maid, who was bedecked in all her mistresses’s bijoux. “I thought, ‘No girl will carry a bag this season,’” said Jacobs. “It will be carried for her.”

Vuitton always starts with the bag, and the originals were real luggage — steamer trunks and cases meant for elite train travelers. So at five past 10 a.m. on Wednesday, two massive steel doors parted and a full-scale locomotive, navy blue with the name Louis Vuitton emblazoned on the tank in gold lettering, pulled into the temporary LV station at Cour Carrée du Louvre, blasting steam into the front row as it chugged along. It was, in Jacobs’ words, “no joke.” All aboard were elegant ladies in crumpled ponyskin hats with fluffy floral add-ons and sky-high, square-toe Mary Janes. They disembarked one by one, each greeted by her own uniformed porter to handle her fantastic bags.

Stately suitcase-inspired styles came in ostrich, mink, and purple-sequined blanket wool. There were crocodile train cases with giant Swarovski closures — taken from the crystal giant’s bathroom department because the fashion assortment wasn’t big enough. The baggage spree went from miniature to oversize, each one a spectacular display of Vuitton workmanship, whether traditional or out-of-the-box, as in the “dogs,” done in shaggy, long blonde hair dip-dyed pink and blue like a prized and pampered Maltese.

And yet the accessories did not outshine the clothes, shown mainly as an elongated tri-layered look — coats over skirts over cropped pants — the sum of which was a gracefully exaggerated bell silhouette. A craftwork focus yielded extraordinary fabrications, such as jumbo mosaic beading, a floral ponyhair “plaid” on coats and skirts, and holographic tweeds in trippy shades of green and purple. Each square of the incredible patchwork leathers had been numbered and meticulously pieced together like a puzzle. The bejeweled buttons on jackets and the cuffs of pants were actually elaborate brooches. “Just naïve, simple decorative techniques,” said Jacobs, his words not to be taken literally.

Asked if he remembers what it was like to have no money, Jacobs didn’t hesitate. “I remember very clearly,” he said, adding that the difference between then and now isn’t as vast as one might think. “You do what you can with what you’ve got to work with,” he said. “And, here, you’ve got a lot to work with.” Enough to outdo himself one more time.