Paris’ big freeze of 1947 was the jumping point for the designer’s strong fall lineup. 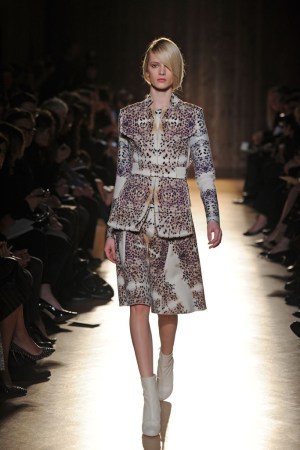 Paris’ big freeze of 1947 was the jumping point for Roland Mouret’s strong fall lineup. “There was a sense of contradiction between a new rising elegance, an haute couture attitude whilst others struggled to keep warm,” Mouret said in his show notes. A slightly twisted contrast, perhaps, but the designer approached his theme with a subtle hand. He offered elegant form-fitting shapes, with which he is most comfortable, that gave the lineup a seductive, Hitchcock glamour. But Mouret also loosened silhouettes slightly for suits with A-line skirts and added several interesting folding techniques: Dresses and suits had origami-style twists on the upper back, and apronlike overlay pieces graced a few looks, some with large pockets attached almost like an afterthought. The folding and layering could have easily looked complicated, but Mouret struck just the right balance. As he put it, they served as “a protective layer around yourself.”