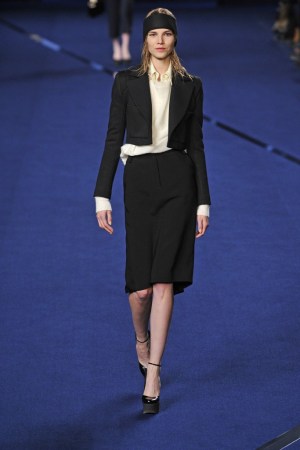 “Paris in the effervescent Seventies,” according to the show notes, was a period during which Sonia Rykiel blossomed, her iconic style — the oversize coats, the charming knits and the signature red frizz — making its mark on the fashion scene. That moment inspired creative director April Crichton, though exactly how remained unclear. The lineup included several ruched elastic dresses and a rust-colored knit suit with a peplum that had some charm, but the overall effect, while wearable, lacked the sense of Parisian joie and the soul of the namesake founder, who, in the only emotional moment of the show, was handed a bouquet by one of her granddaughters, to much applause.