The designer duo handled their full moon theme with restraint and gave their lineup an overall touch of dark romance. 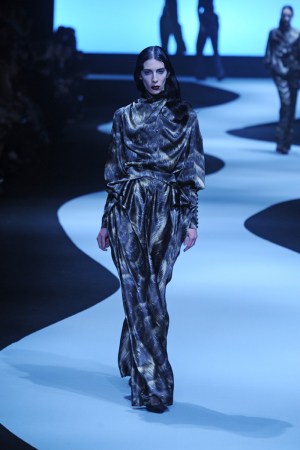 The full moon. It makes wolves howl and humans act in unexpected ways, or so the myth goes. It was also the set at Viktor & Rolf and, perched above the backdrop wall, provided a shadow play of model silhouettes in dramatic poses moving across a conveyor belt before hitting the runway.

It was definitely a striking visual, but given Viktor Horsting and Rolf Snoeren’s history of taking an inspiration and exploiting it to the nth degree, it could have gone in several directions, i.e., new moon rituals, lunar madness, the look of sleeplessness, migraine chic. However, the designer duo handled their theme with restraint and gave their lineup an overall touch of dark romance — an astute move, considering their last few collections (remember last season’s Barbie looks?) — were largely ill-received.

Horsting and Snoeren started with several printed pajama-inspired silk tops and fluid pants with ruffled details. (It is, after all, more common to sleep when the moon is out.) They added a touch of whimsy by playing with several proportions, most notably for tops that featured gimmicky elongated sleevelike attachments that the models could slip their hands through. For evening, they offered several transparent gowns embellished with glass, sequins, fur, fringes and ruffles with a Twenties, Art Deco flair. Several carved fur coats added to the novelty appeal of the collection, which, although far from perfect, was still an improvement over the last few seasons.