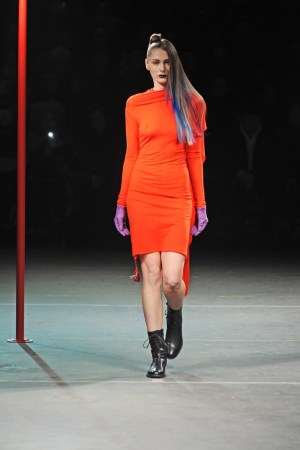 The fiery shade of red that opened Yohji Yamamoto’s show was promising, a powerful color that signaled emotion, whether anger, love or rage. Shown on three dresses, simple by Yamamoto standards — clingy jerseys with uneven hems, gently pulled and draped in his signature asymmetric way — it was clear that color was the message, and a consistent thread throughout the collection. It turned up as a band on a black dress, a scarf tied around the waist, on the tips of dip-dyed hair and so on, but the spark never materialized. What to make of this outing? Yamamoto has proven his genius time and again, so the bar is always sky-high. There were fine pieces among the cozy amorphous wraps, regal navy capes and deconstructed military garb, and the knitwear was a standout. But most confounding was the finale of coquettish lace-up dresses staged in an obvious way that was so unlike this most cerebral designer. It wasn’t just a matter of clothes that fell short of expectations. Something bigger was missing — the core of Yohji Yamamoto.