The London-based designer took inspiration for his fall collection from the French film Trois Couleurs: Bleu. 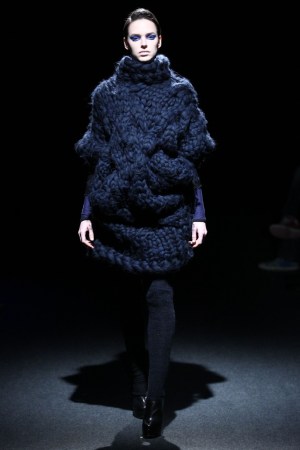 London-based designer Johan Ku took inspiration for his fall collection from the French film, “Trois Couleurs: Bleu.” The first half of the show consisted of blue and black knits, from large, sculpturally chunky navy dresses and mufflers to more sleek, fitted minidresses and shifts. He paired these with black harem pants, some of which had one tight and one loose leg, or with knit tights with one leg each in black and blue. The second part of the collection had echoes of Ku’s last offering, with a series of glow-in-the-dark items in an abstract blue and white print. The more interesting of these styles were covered in a layer of black jersey that had been shredded vertically, creating a cagelike effect.