Christopher Bailey's collection had a youthful feel, with silhouettes and accessories that had a whiff of the early Sixties. 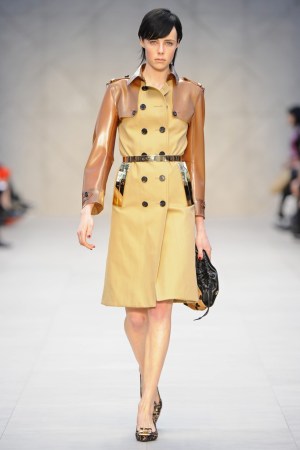 There’s gold in them thar hills or, in the case of Burberry, in the green expanse of Hyde Park — where the brand staged a show with plenty of shine. Christopher Bailey’s collection had a youthful feel, with silhouettes and accessories that had a whiff of the early Sixties.

Indeed, Bailey called the show “Trench Kisses: A Collection of Classics and Christine Keeler,” referring to the infamous model and showgirl who nearly brought down the British government in the 1963 Profumo affair. The designer channeled the demure dress of the period, with knee-length skirts, some crafted from translucent rubber, and kitten-wedge heels in animal prints, accented with gold buckles at the front. Chic, slightly boxy mink and calfskin coats came in zebra, giraffe or leopard prints, while some trenches boasted translucent rubber details. One dark red coat had gold bar embellishments at the front and back, while another was dotted with shiny grommets around the bottom. Bailey also played his hand with a heart motif that made its debut at his men’s collection last month in Milan; here he dotted them all over shirtdresses and blouses and plunked big gold hearts on white dresses for evening.