A heightened focus on the new talents from Central Saint Martins contributes to London's re-emergence as a fashion capital. 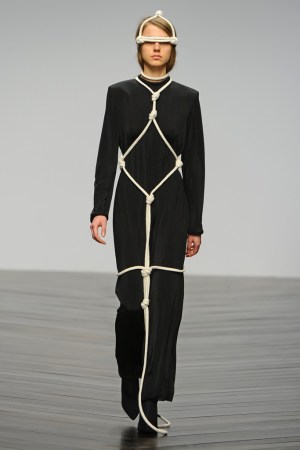 With more big names choosing to show in London – including Tom Ford and L’Wren Scott – the city is re-emerging as a fashion capital to be taken seriously. This includes a heightened focus on the new talents emerging from Louise Wilson’s MA course at Central Saint Martins.

The winner of the L’Oréal Prefessionel Creative Award was Eilish Macintosh, whose experiments with rope were shown twice during the show. The first time around, she knotted rope into cage structures that encased simple black jersey maxi dresses. There was a macramé-meets-bondage look to these, especially with provocative portholes located over and under bosoms, and in the center of buttocks. Her second outing showed rope used as exaggerated whipstitch edging, and to anchor loose gathers on PVC separates.