The designer proved he has plenty of ideas — perhaps even too many — to propel his fledgling house into fashion's bigger leagues. 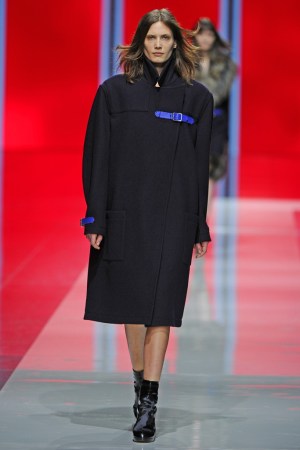 With his former boss at Versus, Donatella Versace, and new majority shareholder, PPR honcho François-Henri Pinault, looking on, Christopher Kane proved he has plenty of ideas, perhaps even too many, to propel his fledgling house into fashion’s bigger leagues.

Winking to his Scottish heritage, Kane opened his fast-paced, tough-chic show — staged on a vacant floor in a modern office block — with a run of kilts in metallic-tinged camouflage. He also transported the hip belt from kilts as closures on boxy navy wool coats and as a harness on two-piece dresses.

Brain-activity scans served as a quirky print on black dresses — and an apt symbol for Kane’s prolific idea factory.