There were three very different ideas of femininity on the catwalk in collections from Claire Barrow, Ryan Lo and Ashley Williams. 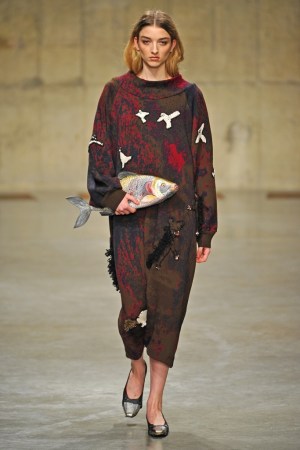 There were three very different ideas of femininity on the catwalk in collections from Claire Barrow, Ryan Lo and Ashley Williams. Claire Barrow, making a return to the Fashion East runway, began with a moody reflection on life’s mundanities. Using lamp shades as hats and watering cans and bowling balls for handbags, she worked in brown corduroy for coats embroidered with white birds. Full-skirted dresses came in black velvet, khaki velvet devoré and a white veiled bridal option. It was jolie laide and a bit awkward, but that was the point.

Ryan Lo, also showing here for the second time, had a soundtrack of power love ballads to back his pieces inspired by lonely career girls, Sailor Moon and Hello Kitty. Sounds like a dreadful start, but it was fun, frothy and over the top, with furry coats in cotton candy tones of pink and blue. A Cruella de Vil skirt suit came in black-and-white striped fur, and a mini party dress was done in layers of sheer pink Lurex and chiffon zigzags. There was a touch of the Meadham Kirchhoff madness about Lo’s look, but it was done in his own innocently cynical way.

Fan magazines from the Fifties formed the inspiration for Fashion East newcomer Ashley Williams’ collection. Tunics and dresses were printed with Elvis Presley’s face, while others had “Subscribe!” or “Celebrate and have a good time” written all over them. Baby blue faux fur in a skirt suit had a sweet, childish appeal, a point that was driven home by the teddy bears the models carried.