Fabrics reached a new level of lavishness in this collection. 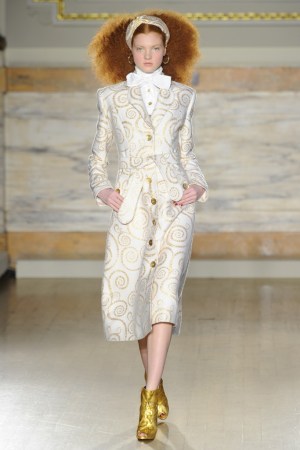 A designer seeking opulence, color and texture could find no better confluence of references than Gustav Klimt and his patron Adele Bloch-Bauer, whose gilded portrait he famously painted twice. L’Wren Scott spun the work of artist and client into gold, quite literally, in her fall collection, in which fabrics reached a new level of lavishness.

The shoes and some dresses were done in 23-karat gold leaf. “I’m gold-obsessed,” Scott said during a preview. “Because there’s gold all over the world and it’s the most valuable thing at the moment.”

Scott opened the show with an ivory jacquard trench laced with gold swirls, a motif that repeated on high-waist trousers and a tailored cape. The fabrics were rich, in colors such as cobalt blue and jade. A series of purple tweeds woven with gold thread had a beautiful shimmer that tread the collection’s subtler side. At the other end of the spectrum were mosaic print gowns, a couple of which took the Klimt clause a little too literally.

Scott does not trade in dressing for the mundane, but at the end of the day, “I like wearable clothes,” she said. So her signature headmistress dresses were reworked in jewel tones with leather accents, a standout of which was a simple black style with a gold leather snake that wound around the body.