For his grand reentrance to the formal fashion schedule, the designer ruled out subtlety from the start. 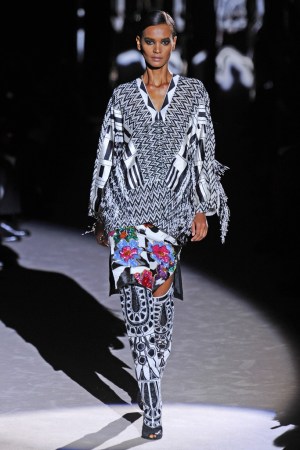 Subtlety was ruled out from the start. For his grand reentrance to the formal fashion schedule, Tom Ford booked Lancaster House, a historic former home of English aristocrats. It was by far the most impressive venue on the London circuit. The room was waiting to be wowed, which is what Ford knows how to do.

On each seat was a simple white card that read “Cross Cultural Multi Ethnic,” and Ford wasted no time making his point that “that’s what the world is,” as he said after the show. The first look out: Liya Kebede in a beaded and fringed tunic done up in a black-and-white zigzag pattern. It was worn over a slim skirt in cow-printed ponyskin with big, colorful flowers embroidered on top. On her feet: over-the-knee boots in a black-and-white tribal pattern.

From there commenced a parade of clothes that were loud and proud. There were options in the way of jackets: A zip up hoodie pavéd in floral sequins not for you? How about the cropped baseball jacket — versions of which abounded — in magenta fur? Maybe a patchwork of patterned leopard and zebra mashed up with black-and-white checks?

What was fairly subdued on top, such as a black lace T-shirt, was a decorative binge on the bottom — a purple tulle skirt beaded in a rainbow of florals and swirls and paired with matching knee-high boots. The show’s rare moment of relative calm came by way of a hearty leather poncho with long, Western-style fringe. Otherwise the exercise in excess cycled through printed pajama pants, head-to-toe pink and purple ponyskin, and so on. Then a series of black jersey gowns with sequined starbursts radiating from the hip to start the finale, which ended with Ford. He stood on the runway basking in the flashbulbs and the rain of kisses. “When you start thinking about clothes that are going to walk down a runway and be photographed, and all those images go out into the world, you think very differently about the clothes,” Ford said. “They have to be amped up.”