The designer sought to blend British sartorial wools with feminine shapes and embellishment — with little regard for convention. 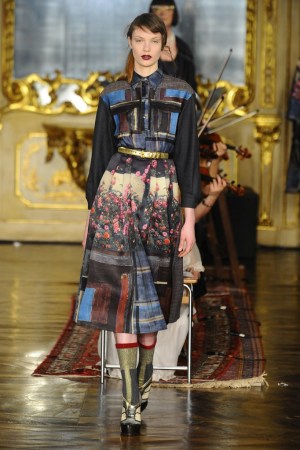 A series of tableaux vivants representing genteel Bohemians greeted guests at the Antonio Marras show. The elaborate sets, featuring actors of all ages, paid tribute to Virginia Woolf, Vita Sackville-West and other prominent members of Britain’s Bloomsbury Set. “What interested me most was their eccentricity and the fact that they rejected fashion and were absolutely not interested in what was happening in the world, but rather in creating their own,” Marras said backstage. The designer sought to revive that spirit with clothes that blended British sartorial wools with feminine shapes and embellishment — with little regard for convention. Full-skirted, Fifties-style dresses were spliced together from panels of checked or pin-striped wool, silk printed with geometric or floral motifs and Lurex-threaded floral fabrics. Lace was appliquéd and embroidered on a Prince of Wales-and-houndstooth jacket, worn over a skirt incorporating an Army blanket.

At times, the hodgepodge of textures and colors verged on overkill, but taken separately, these pieces should appeal to fans of Marras’ joyfully eclectic style.