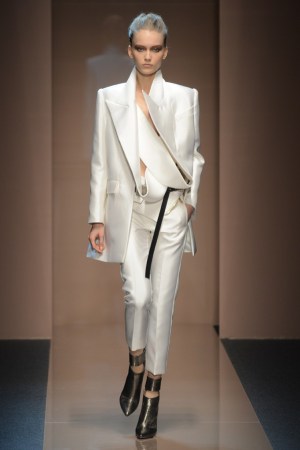 After many years of the same Via Pontaccio venue — the house’s historical headquarters that owner Paris Group moved out of last September — Gianfranco Ferré’s fall collection was shown at the Palazzo della Permanente. In the show notes, the new location was billed as a “new start for the maison.” The lineup did little to reinforce that notion. Designers Federico Piaggi and Stefano Citron continued on their exaggerated architectural path with overly constructed, layered looks and strong Eighties lines — irony not included. Often, the results came with a heavy touch: The sharply tailored white coat that opened the show featured extended, draped lapels. The focus on the waist, rendered mostly in wide panels that moved away from the body, didn’t exactly flatter.

That’s not to say that there weren’t some strong moments. The outerwear was appealing, i.e., the graphic, tailored coat in two shades of blue and a terrific fur number that was sheared in the back to mimic alligator skin.