Mariuccia Mandelli made a case for her own brand of power woman with a lineup that had a tough edge and an early Eighties vibe. 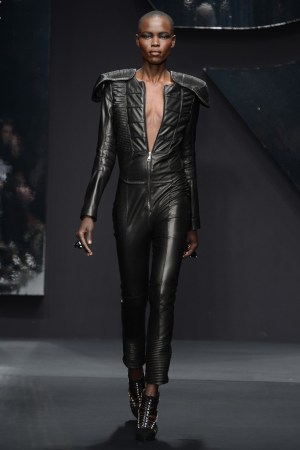 Mariuccia Mandelli made a case for her own brand of power woman with a fall Krizia lineup that had a tough edge and an early Eighties vibe. There was an abundance of black leather, from the biker jumpsuit with flaplike extended shoulders to a moto jacket with fur insets, not to mention the skin-tight pants shown throughout. The show notes said these were clothes for “a proud, feisty woman who is prepared to defend the fragility hidden beneath her symbolic armor.” A bit of a head-scratcher, but the furs, roaring panther motifs and heavy metallics were the idea of female strength. Much of this collection came with an overt sexiness, which at times felt overstated but the sweeping plissé gowns that ended the show offered a welcomed soft counterpoint.