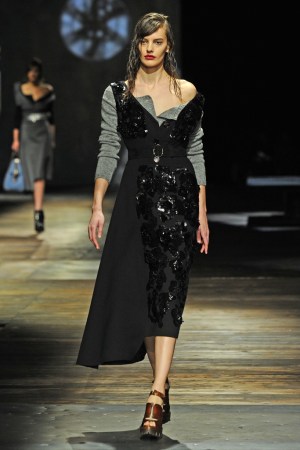 Miuccia Prada delivered a masterpiece on Thursday evening, a cinematic reverie that offered a little retro, major glamour and a bounty of some of the most exquisite clothes we’ll see anywhere this season. As for her obvious retro references, Prada proved once again that the best of fashion can marshal elements of the past to forge a look and mood that are in fact very new.

Backstage, Prada said the collection was about “raw elegance” and the “romance of old-fashioned glamour.” That said, the designer’s notion of “raw” is quite evolved, referring most likely to the juxtaposition of lavish embroideries with sturdy tweeds and leathers.

She may have referred as well to her models’ mysterious undone guises, their hair rained upon and their bodices often disheveled and dropping off of one shoulder. Most carried oversize bags large enough to support a quick getaway. The models moved against a projected backdrop of shadowy images — birds in flight, a lounging cat, ominous fencing. Such was Prada’s mood of provocation and mystery (even while incorporating pieces in pink and blue gingham), as if a whole bevy of noir heroines fell prey to an unnamed danger in one convergent moment. Not surprisingly, a Forties sensibility wafted about, particularly in waist-conscious coats and suits, either fit and flare or lean-skirted. But given their spliced in, silken jeweling and asymmetric hems, Hitchcock’s costumer might have had a brief Skype chat with Rei Kawakubo.

As the audience wrote its own backstories, what unfolded with brilliant clarity were the fabulous, womanly clothes: coats with deep, dimpled fur cuffs; suit jackets with wide, ribbed hems; sensual, disheveled dresses worn over simple T-shirts, lavish furs. And while “bold colorist” may not be the first word association that strikes regarding Prada, here she took bold chances with her palette, playing a bright blue border against a red-and-black tweed suit or a giant red croc bag against a green leather suit.

It all made for fashion drama of the best kind, the kind that translates beautifully from cinema to vérité.