Francisco Costa made a powerful statement with lots of leather, accentuated shoulders on tailored pieces and several oversize silhouettes in stiffer fabrics. 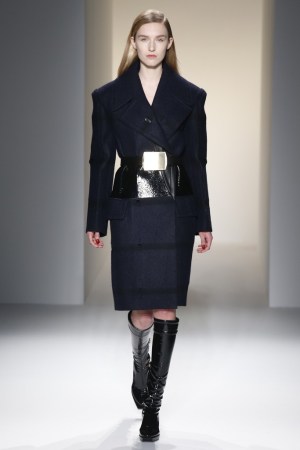 Some people have unconventional notions of falling in love. Backstage before his Calvin Klein Collection show, Francisco Costa described how he was taken by a pivotal scene in “Ivan’s Childhood,” Andrei Tarkovskiy’s 1962 Russian film in which two characters discover their feelings for one another in a bare forest setting (cue the birchwood benches, a first at Calvin). “When they are falling in love, it was all about the coat,” Costa said. “That’s so fitting to the house because that’s how Calvin started.”

The Soviet influence translated into a distinct military bent, particularly with the first few suits and dresses. Worked in mostly black and navy, they were rendered in a faint plaid with vinyl inserts that added a patentlike surface sheen. The bleak nature of the era was also reflected via some bulky coats. Costa made a powerful statement with lots of leather, accentuated shoulders on tailored pieces and several oversize silhouettes in stiffer fabrics. He countered this almost workmanlike sensibility with sexy bandeau tops that were wrapped in the back. One version in a forest green was teamed with voluminous pleated pants that read M.C. Hammer, yet they looked sexy, never gimmicky.

Throughout, Costa played with interpretations of plaid and grids. For one variation, he worked with mills to develop a weave technique that rendered perfect cutouts on flannels and wools. Other surface decoration was minimal. On a recent trip to Japan, the designer found tiny hinges in a hardware store. They inspired adornments that were inserted graphically into a gridlike pattern on, for instance, a leather V-neck dress.

Even if the drilling sounds on the soundtrack suggested otherwise, the overall effect of the collection wasn’t raw, but ultrasophisticated.