With hints of a Forties heroine in mind, the designer created a collection about glamour and gumption. 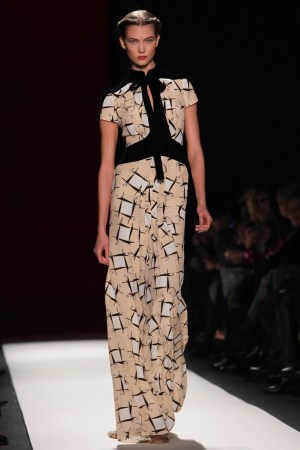 With hints of a Forties heroine in mind, Carolina Herrera designed a collection about glamour and gumption. These were clothes deserving of a woman who thinks nothing of commissioning her own original score, as Herrera did, working with composer Tom Hodge and producer Javier Peral on “Capriccio for Carolina,” the show’s soundtrack, recorded with the London Contemporary Orchestra in November.

Dresses and gowns with high keyhole necklines had defined shoulders and teeny belted waists that highlighted the graceful movement of the fluid crepe skirts. Another beauty came in light blue silk charmeuse with a purple fox-fur collar. Sometimes, however, the add-ons were too much; one gown looked like it had two flower urchins tacked on its crisscross straps.

Developing her own prints is a source of great pleasure and pride for Herrera. This time they were based on flowers, specifically dahlias and urchins, shown big, small and, in the case of a sapphire velvet gown, hand-painted. There was potential to overwhelm, but the florals were evenly dispersed enough to infuse whimsy without weighing things down. Speaking of weightier things, the men’s wear-inspired looks, such as a great Hepburn-esque wool suit worn with a chevron wool and fox-fur coat, and a sturdy striped blanket coat, had as much bravado as the gowns.