Creatures of the Wind RTW Fall 2013

Based on wearable classics, the clothes merged a Seventies vintage store vibe with designer-level sophistication and craftsy imagination. 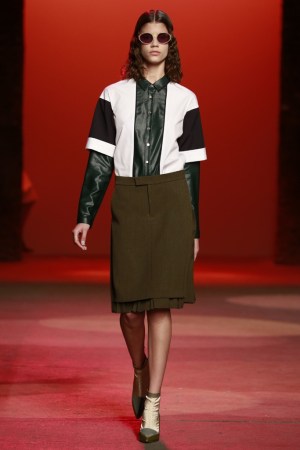 Chris Peters and Shane Gabier did not title their fall Creatures of the Wind collection “Candy” because it was sweet or precious or included dresses that brought to mind the woefully overused fashion term “confection.” Rather, they intellectualized. “You know how candy doesn’t look like a real thing?” said Peters during a preview. “It looks like plastic but there’s an appeal of this nonreal thing to it.” That thought translated to things meant to be worn, not eaten, through fairly simple silhouettes applied with interesting colors, such as orange and heathered pink, and shiny treatments, whether Swarovski embroideries or slick surfaces, like vinyl and polyester, that were often shown in fabric blocking.

This proved a perfect marriage of Creatures of the Wind’s past — gleeful eccentricity — and the Darwinian path the designers find themselves on now: Evolve toward the commercial or face extinction. Gabier and Peters are aware of this crossroad. “We both feel like this collection is very much us but you can see a buy in a more clear way,” said Gabier.

Their lineup of what could be described as glamour nerds wore looks reminiscent of uniforms, with square tunics and shirts paired with pleated skirts in Japanese military wool and starched cotton. Based on wearable classics, the clothes merged a Seventies vintage store vibe with designer-level sophistication and craftsy imagination. One great look, a sturdy peacoat in black-and-yellow houndstooth with ivory-and-gray vinyl trim, was worn over a bottle-green polyester pleated skirt. A similar skirt formed the bottom of a short-sleeve dress with a boxy ivory top with navy-and-orange vinyl detail. There was a tailored masculinity, particularly to the outerwear, yet it was pretty too. A plaid varsity jacket that sparkled with vertical crystal strips, for example, was beautiful, and the slipdresses, done in leather with colorful woven jacquards, were sexy.

Creatures of the Wind RTW Fall 2013