The designer turned to a heady mix of glam rock and Studio 54 — a moment in the Seventies when she began to spread her wings sartorially and otherwise. 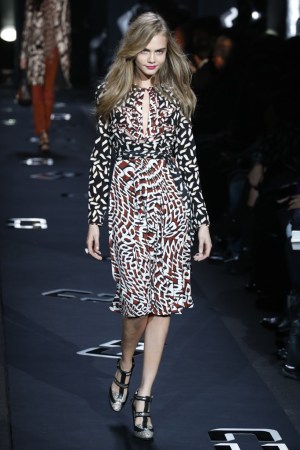 Diane von Furstenberg is powerful, glamorous and, to those who know her, the ultimate tease. She also lives a jet-set life, which always inspires her clothes in one way or another. For fall, von Furstenberg turned to a heady mix of glam rock and Studio 54 — a moment in the Seventies when she began to spread her wings sartorially and otherwise. “DVF has always been about effortless and easy,” she said during a preview. “It’s the dress to get laid in and it’s the dress to get the job in. It’s the dress that closes the deal.”

Without a creative director by her side for the first time in over a decade, von Furstenberg was determined to recapture some of her label’s essence that she felt had recently gone astray. She did so in no uncertain terms, along the way exploring numerous aspects of Seventies glamour from the wrap dress that skyrocketed her to fame to disco-ready fare such as a bronze lamé blouse and gold leather pants. She also reworked some of her early prints, i.e., chain and animal motifs, the former on a pantsuit, the latter on a blouse and matching pants. If at times her Seventies redux felt a little too literal, much of it — for example, a fox-collared coat and lush red velvet dress-and-pants combo — radiated a timeless glamour, just like DVF herself.