The total look was fierce and expensive-looking if familiar, with the strongest statements delivered in edgy outerwear and mannish trousers. 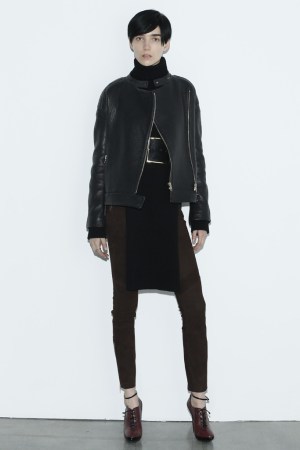 Lest anyone mistake J Brand for merely a skinny jeans line with a few cool collaborations under its low-rise belt, its ceo, Jeff Rudes, and its new owner, Fast Retailing, issued a money-backed statement to the contrary this season. J Brand held its first ready-to-wear presentation, featuring 19 looks by design director Donald Oliver. “We’ve been very strategic about growing,” said Rudes, noting that they launched the rtw category three seasons ago, six years after the jeans, “to make sure the customers were ready for it.”

Ready or not, the customer will be faced with the slick urban androgyny that has been fueling the contemporary market and that J Brand has been testing since its rtw debut. The total look, styled by Karl Templer, was fierce and expensive-looking if familiar, with the strongest statements delivered in edgy outerwear and mannish trousers. Of the former, a cropped boiled-wool jacket in an oatmeal color almost looked like shearling; of the latter, the white leather track pants were cool and slouchy. There was also some denim disguised in fancy coatings and frosty colors.