This was perhaps the most overtly glamorous collection Jacobs has ever done, rendered with a moody gentility that transported it far beyond the banal. 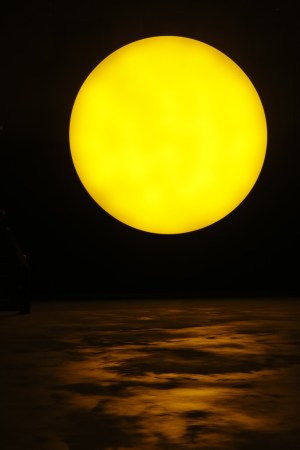 “How can you use this in your work?” said Shrink to Patient. “This” being the wistfulness the latter has felt since Hurricane Sandy forced him from his home, to which he has yet to return. The answer came through Thursday night. “There was just something about comfort and familiarity,” Marc Jacobs said during a preview of his fall collection that morning. “It’s very simple, very straightforward, beautiful and nice…glamorous, but [with] a kind of sadness and melancholy. There’s a romance to it.”

In fact, this was perhaps the most overtly glamorous collection Jacobs has ever done, rendered with a moody gentility that transported it far beyond the banal, his invocation of “familiarity” notwithstanding. With forces of nature on his mind, he commissioned a Stefan Beckman set inspired by Olafur Eliasson’s “The Weather Project” at the Tate, a huge hot sun that shone intensely on the models, their off-beat melancholy mein made more so by choppy shag wigs by the brilliant Guido and their slow, ethereal gait as they made two trips around the circular poured concrete floor, first under the sun’s disorienting low-frequency light that removed all color, allowing the audience to see everything only in blacks, grays and an otherworldly sepia. This trip revealed lean, spare shapes steeped in classics — mannish coats, racy briefs, Aran sweaters and Fair Isles and items derived from sleepwear: robe coats and pajamas. “There’s been a lot of flus and viruses; I’ve been coming to work in pajamas and sweatpants,” Jacobs said. “I haven’t put on proper pants all season.” There was also plenty of shine that broke through the sun shenanigans.

The light then changed to something resembling normal, revealing a gorgeous palette of neutrals and soft colors — dusty pinks and blues, deep, rich burgundys and greens. An artful simplicity reigned, starting with the fabrics; no bonded this nor techno that. Rather, Jacobs opted for traditional materials of the most luxe sort: double-faced cashmeres and alpacas; refined silks ample fur — beaver, fox, mink. By day there were chic skirt looks and fabulous coats including a gray clutch and a robe silhouette that was stellar twice — in blue alpaca and pink cashmere. As for the shine, it came via an embroidered fishnet motif on pajama looks scaled down to sensual proportions, and fox-collared tulle jackets covered in big, loose, light-as-air paillettes, some oversequined gowns, their lanky lines perfect for — drumroll, please — the red carpet.

As just about everyone knows, this show was delayed not in the old-school, hour-or-two manner, but from Monday night to Thursday, due to delivery issues. Some people weren’t happy, and understandably so. Yet those who were able to change plans — and the room was packed — surely went away happy, having taken in a stellar show. Definitely worth the wait.