So what was the plot line? A tale of two designers, it had mystery, suspense, harmony, beauty, optimism — and some truly great clothes. 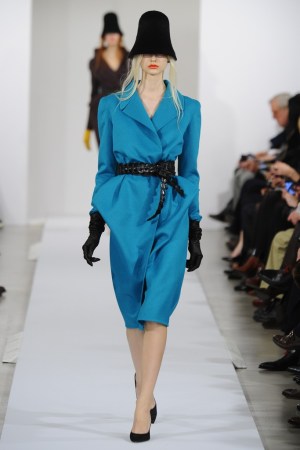 What exactly is a “designer in residence”? You may have found yourself wondering that about three weeks ago, when WWD broke the news that Oscar de la Renta had invited John Galliano to join his studio in said role. During a preview of his fall collection last week, de la Renta defined Galliano’s presence only in vague terms with no word on the length of the arrangement. “He has been working with me,” said de la Renta of Galliano, who was working that day, but avoided the studio during the preview. “I work with people. I don’t work by myself. It’s so wonderful to have somebody with an eye. He’ll show me something and we talk about it.”

Despite numerous rumors about Galliano’s presence at de la Renta’s show on Tuesday evening — he would sit front row; he would join de la Renta for the bow — Galliano stayed backstage and out of sight. Still, his presence was felt. Perhaps it was the power of suggestion, but the opening sequence of wrap coats and jackets worn over slim, knee-length skirts seemed descended from the house of Dior, where the Bar jacket, with its nipped waist and sculpted peplum, was a perennial focus. The de la Renta versions in eggplant flannel, teal and black were stripped down, cut in lean lines with a dose of melancholy edge. Some of the girls wore streamlined cloche hats and one jacket came in black leather, expertly draped and folded at the waist with a hint of origami technique.

A departure from the girly froth and fun that de la Renta has pursued the past few seasons — no question. Yet many looks were devout to de la Renta’s canon, such as a fit-and-flare black silk organza dress with white floral embroidery, and the fully beaded silver T-shirt and skirt worn by Lindsey Wixson. As the show progressed, the lineup seemed to tell a story. While not a traditional narrative per se, it moved from shadowy elegance — hooded capes worn over skinny leather pants — to romantic-yet-bold toile motifs on A-line skirts and dresses.

Then came evening. Beginning with the chic and spare — a black jacket worn over a naked torso and fluid floor-length skirt — the story built into a world of color with jewel-toned dresses and gorgeous ballgowns in vivid silk faille, their skirt volumes tempered into perfect modern lines. The show’s beauty was telling, too. While typically de la Renta favors a single classic, pretty look, here, it changed with the clothes. The first girls out were plainfaced but for the shock of orange lipstick; those done up for evening wore lavish, dark-eyed makeup and hair greased into waves, a look that might have been transplanted from a Galliano runway of yore. So what was the plot line? A tale of two designers, it had mystery, suspense, harmony, beauty, optimism — and some truly great clothes.