Jack McCollough and Lazaro Hernandez displayed such a comfort level with subtlety, which in turn allowed for an expression of overt sophistication. 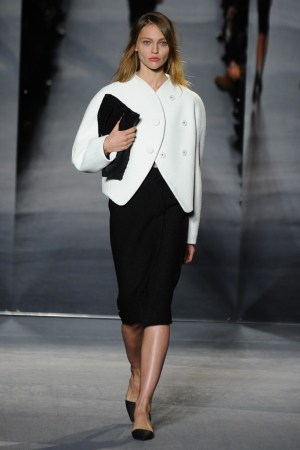 It sounds patronizing to say that this could be considered a watershed collection for Proenza Schouler’s Jack McCollough and Lazaro Hernandez; their work has been extremely refined for some time, including spring’s visually kinetic show. But their fall collection felt like a substantial leap even from there. Here, they displayed such a comfort level with subtlety, which in turn allowed for an expression of overt sophistication. It was as if they were welcoming not just the expected cool fashion girls — they’ll love the lineup as always — but a broader range of fashion-loving women (yes, read: older) as well. It was exquisite.

The designers continue to be fascinated by surface interest and develop their fabrics accordingly. They were inspired by the work of photographer John Divola, whose late-Seventies Zuma series “captured the slow decay of beachside structures.” Yada yada. As there was zero dismal decay in sight, one concluded the inspiration was channeled into the superb fabrics, mostly highly tactile studies in a minimalist palette of black, white and gray tinged with the occasional barely-there pastel. There were dense bouclés, woven leathers and a glorious woven tulle that impersonated tweed.

With their first looks out, McCollough and Hernandez hinted at New York man-of-the-moment Balenciaga in the precise shape of a shift and the rounded shoulders of a coat. But they moved on quickly to more modernist shapes, some that swung mid-Nineties, some completely new. Save for a few dresses, most pieces were cut with ease, often shown in high-contrast combinations for newfangled spectator pop — a white bouclé jacket over a black skirt, a dress in pale gray leather with black suede sides. Though plenty interesting, the clothes felt completely unfussy even when gussied up for evening, as with sleek power-woman chain embroideries. The show was at its most girlish with a pair of boxy needle-punched leather sweaters over frothy ostrich feather skirts. Yet even then, a fabulous sense of security held sway in this delivery of chic, confident clothes for confident women.