The designer left the heat and passion of Spain, where he went for spring, for a sojourn to Russia. 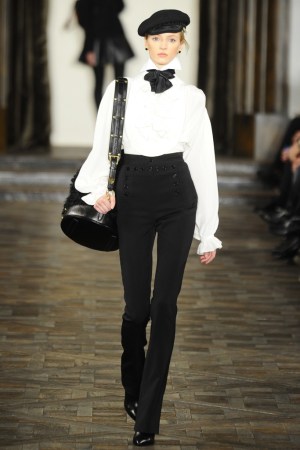 Ralph Lauren has been hit with a case of sartorial wanderlust of late. With the collection he showed on Thursday morning, he left the heat and passion of Spain, where he went for spring, for a sojourn to Russia (which he visited for the first time when he opened his Moscow flagship in 2007). There he found dramatic romance worthy of a Tolstoy heroine. But why stay in one place? Lauren worked in a healthy Parisian soupcon that was a cross between hello-chic-sailor and Jean Valjean.

Lauren’s day looks drew heavily from naval motifs, particularly an array of jaunty outerwear, from snappy peacoats to braid-trimmed officer’s fare. These came in various proportions, sometimes cut away. Though most were black or navy, Lauren lightened the lineup with a roomy ivory topper. He also showed terrific knits and poetic shirts with billowing sleeves, such as the one worn with black pants that opened the show.

As for the pants, Lauren went faux-literal with his take on the classic sailor motif but cut them as skinny stovepipes. And in cross-cultural mode, his other favorites were demonstrative Cossack pants shown in deep burgundy and navy, sometimes pleated for extra volume. While not for everyone, these injected a sense of daring into a sometimes-too-safe range.

Lauren broke up the mannish influence with lovely fluid dresses in deep-toned velvets — wine, blue, purple — some shown under jackets and with delightfully audacious carpet bags. These led into a mostly glorious evening lineup. A full-skirted bordeaux georgette and tulle gown under a shearling capelet would have suited Anna Karenina, while there were more languid beauties, too. Cases in point: a divine beaded jersey with plunging neckline and a midnight column with jeweled yoke that channeled one of Lauren’s favorite ladies, Audrey Hepburn. No, she was neither French nor Russian. But Ralph’s tastes, like his appeal, are global.