For fall, he clarified and refined the look of the woman he designs with a sportswear riff on exotic skins and ultraluxe materials. 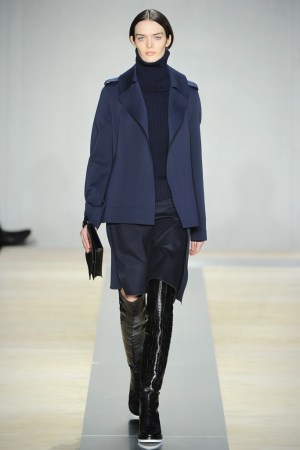 Each season, Reed Krakoff has clarified and refined the look of the woman he designs for and, for fall, he furthered the notion with a sportswear riff on exotic skins and ultraluxe materials.

Backstage before the show, Krakoff said he was looking at the uniform, “in every aspect of it, from men’s tailored to utilitarian to military uniforms, juxtaposing these with a fluid, sensual, confident luxury.” It made for strong tailored pieces, particularly the outerwear, which was terrific — from the first exit, a chic jersey military jacket, to a linear coat in ocean blue cashmere and napa that looked cooly mannish.

If some of the draped and folded dresses demonstrated a heavy hand, Krakoff countered it with a delightful soft touch, literally, by using fur on unexpected pieces such as the lovely sleeveless V-neck top, sheared beaver in front, cashmere in back.

Krakoff repeatedly turned to alligator skin for design cues. It translated, for one, into a black vest made from the real thing, a satin coat that was stamped to resemble it and a print on a blue cashmere sweater. He may have slightly overstated the concept, but that could have been his intention. After all, Krakoff’s business has been mainly driven by his accessories, which include many bags in exotics, so it’s hard to blame him for wanting to spread some of that magic.