Jonny Johansson brought that sense of crackling energy that everyone claims to feel in London, where Acne usually presents, to the hallowed mood of Paris. 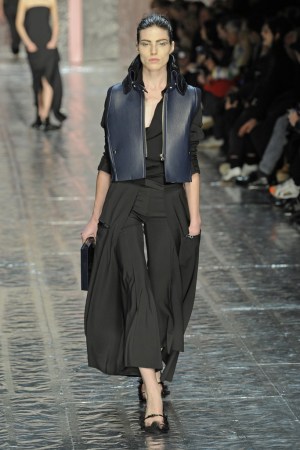 Showing his women’s Acne collection for the first time on the Paris schedule, Jonny Johansson brought that sense of crackling energy that everyone claims to feel in London, where Acne usually presents, to the hallowed mood of Paris. It began with the set — a foiled runway extended from a pink box that mechanically disassembled itself before the models walked.

The occasion for the Swedish label’s Parisian excursion was a collaboration with photographer Katerina Jebb and the Musée Galliera, which opened its historical fashion archives to Acne and Jebb. The result was photomontage prints that appeared on looks including sleeveless silk dresses, their skirts so long the models held them in their hands, and some of the men’s wear (a capsule men’s collection was part of the three-way collaboration). It was hard to tell that the images were of the inside of the garments, but never mind. They added depth and the insider flavor that art and fashion people crave.

But visually, the prints were not the most interesting part of the lineup. More compelling were the layered silhouettes, which contrasted deconstructed tailoring and outsize outerwear against the softness of trailing silks and panels. A black vest was loosely pleated at the waist with its bottom half done in red metallic leather. The use of color — cobalt, green, chalky blue and gold — was great. If some of the treatments were a bit too aggressive, such as the bonded jackets that were stiff to the point of cracking — they put meat on the collection’s bones.

How 7 Fashion Designers Would Dress the Cast of ‘Bridgerton’