An Vandevorst and Filip Arickx took cues from Maria Duenas’ novel “The Time in Between.” 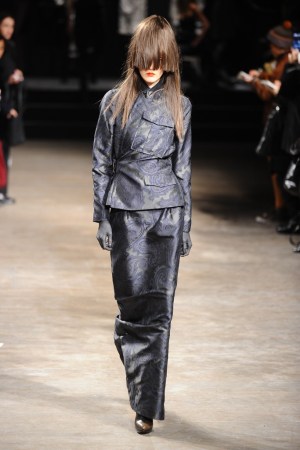 An Vandevorst and Filip Arickx took cues from Maria Duenas’ novel “The Time in Between,” in which a Spanish couturier becomes an undercover spy and sews messages into garments. How the Belgian designers worked the inspiration into the lineup remained unclear. They played with layering and draping, showing, for instance, a black bustier peplum top over a fitted little black dress. Exaggerated volumes were also present, namely at the waist. Some of the silhouettes were charming with a faint glamour, like the languid, gray paisley dress teamed with a furry shearling vest in the same hue.

The presentation’s setting, however, was less than desirable. Held in a standing-room-only format in the dark basement of the beautiful Hotel Salomon de Rothschild, the clothes were difficult to see, causing a handful of guests to dash out before the show even ended.