Albert Kriemler dedicated his fall effort to his mother, who died last December. 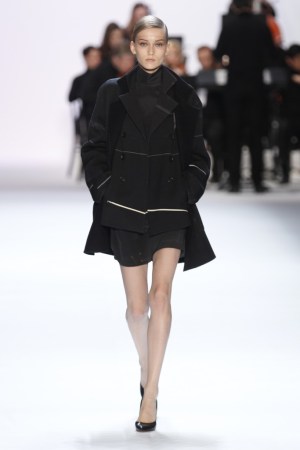 Ute Kriemler, who died last December, personified not only the understated style of the Akris collections her son Albert designs but also the family-owned company’s gracious personality. He dedicated his fall effort to her, with a small orchestra on a corner of the all-white set playing selections of her favorite music: Bach.

The clothes were solemn in their mostly black palette but proud in the high necklines, handsome tailoring and intricate embroidery of Akris’ hometown of St. Gallen, Switzerland.

Albert Kriemler opened the show with a car coat in double-face cashmere, a house specialty. It was black but streaked with faint lines of white and deep purple. One can easily imagine Ute sporting clothes like that as she accompanied the collections to trunk shows around the world. Taut, waist-length jackets and morning coats in angora plaid were also very her.

Yet the designer knows fashion keeps moving, and so he covered new territory: pert capes in mink or a textured Lurex that glistened like caviar; miniskirts in glossy calfskin; oversize herringbone sweaters with chunky scarves. He etched the turtlenecks his mother favored in tulle and stretched them into short dresses and gowns patched with panels of leather, suede or jet beads for modesty.

“She had a lot of discipline in her appearance, you know,” an emotional Kriemler said backstage, struggling to find the words in English to convey his mother’s essence. “In German I can say it better, it’s haltung,” he added, settling on a word that described both her and his tribute: composed and dignified.